“I am asking [prison managers] to err on the side of caution, because there is emerging evidence that certain men are jumping on the trans bandwagon to access, and harm, very vulnerable women in prison.”

A short month ago there was an attempt to rush a bill through parliament that would set a precedent of “gender neutralising” motherhood in law; replacing the words mother or woman with  “pregnant person” in the Ministerial and other Maternity Allowances (MOMA) Bill.

As Baroness Noakes highlighted, this is misogyny written into law. It is:

… set within a broader context of the erasure of women in society. Those of us who care about the position of women have been increasingly concerned about the dilution of the 2010 Equality Act with its protected characteristic of sex, not gender, which should protect women. Some organisations, deliberately or carelessly, conflate sex and gender.

Her impassioned call not to erase the words to describe women’s lives from law rallied MPs and Lords into a wide ranging debate in which they argued that sex matters, and that careless words used in laws and guidance can have real practical impacts on women’s services. As Lord Hunt of Kings Heath said:

Many public bodies are misinterpreting the [Equality] Act, and many women’s sector organisations, especially those that seek to end violence against women and girls, fear loss of funding and commissioning if they want to provide single-sex exemptions. I am afraid that various government departments have watered down the words of the Equality Act in the guidance they have issued to public bodies. Local authorities have misinterpreted the Act and are threatening many small charities trying to provide these services at local level, and people there are frightened to speak up because they believe that they will be attacked and, if they are not careful on social media, accused of transphobia.

The MOMA Bill was for a short Act, legislated quickly, that will probably affect only one ministerial mother before it is updated with something more comprehensive.

But the word “woman” is also absent from another much larger and more slowly developed Bill: The Domestic Abuse Bill which will affect more than 2 million people a year. It will be debated in its final stages in the House of Lords on Monday.

The absence of the word woman, while surprising is perhaps understandable: domestic abuse is most often perpetrated by men against women, but men can also be victims. Around a quarter of  domestic abuse victims in England and Wales are men.

Victoria Atkins, the Home Office Minister, said that the Government had considered “very carefully whether to make the definition [of domestic abuse] reflect the fact that the majority of victims are female” and decided “we wanted the definition to reflect that men can be victims of domestic abuse as well, albeit that it is still a gendered crime.” Their solution is to emphasise the particular impact on domestic abuse on women in the accompanying statutory guidance (which will continue to be updated) 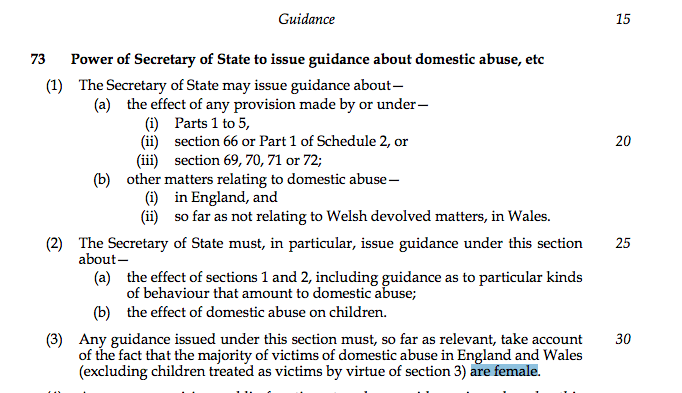 Clause 73, which legislated for the guidance is the single, solitary instance where the word “female” appears in the Bill.

A last minute amendment to introduce misogyny as hate crime: what’s that all about?

The Fawcett Society has not had much to say about the Domestic Violence Bill. It did not give evidence; addressing violence against women is not its thing, it leaves that to other more specialist organisations. But late in the day they have popped up with a campaign of support for amendment 87B, promoted by Stella Creasy.

In Scotland feminists have fought fruitlessly to stop the passing of a hateful new Hate Crime Law which protects everyone but women from hate crime. Adding insult to injury, it does not protect the freedom to say that sex is real and immutable but does provide specific protection to cross dressing men (the expression is not used here to denote or denigrate transsexual or transgender identities, but because “cross-dressing” is given explicit protection of its own).

Instead of including protection for women in the Scottish Hate Crime Bill now, a Working Group, will look into the issues and options over the course of a year. Protection for women was not prioritised: it was judged too complicated to address in haste, and has been parked to be dealt with next year

Why should misogyny-as-a-hatecrime be rushed through in a last minute amendment in England and Wales, when Scotland considers it so complicated it needs a year of work?

Why when the Law Commission is already consulting and  working on a wide-ranging proposal on Hate Crimes (which looks a lot like the controversial Scottish Law) is there a push to rush “misogyny” through here?

Why have Lord Cashman and Baroness Brinton put themselves down to speak on Monday?

Why have Fawcett, the Jo Cox Foundation, Hope Not Hate, Unwomen, Unison Greater London and the Musicians Union cobbled together an alliance to  push through an amendment which jumps the guns of debate on Hate Crime by introducing misogyny as hate crime here at breakneck speed?

Who is really behind this?

Stella Creasy has been promoting “bootcamps” and workshops on misogyny as a hate crime for a while. These were initially co-branded with Stonewall, but Stonewall has mysteriously disappeared from the public face of this latest political push.

This is what the promoters say this amendment is for:

The campaign to make misogyny a hate crime returns to the House of Lords next week as parliamentarians seek to ensure all police forces record the violence and harassment women face.

But  the amendment doesn’t mention women at all, just persons who “are of a particular sex or gender”

It doesn’t talk about counting crimes against women, but about crimes where sex-or-gender based hostility or prejudice is perceived by the victim or any other person. And it says the secretary of State must issue guidance “based on sex or gender” (remember, the guidance is the only place where the predominance of male perpetrators and female victims will be addressed).

Rather than telling the police to track crimes against women — or indeed male violence against women and their children– (which ought to be simple enough if you have a clear definition and a  reliable data field for the sex of victims and perpetratrors) it instead makes misogyny  “gender neutral” and perception based, and adds “and gender” wherever sex is mentioned.

What is the point of an amendment on misogyny that doesn’t mention women?

The proposal is to insert this amendment before clause 73; directly before the single, solitary instance of the word “female” in the Bill, which sets out the requirement for statutory guidance (which will be periodically updated).

What could be the impact of this amendment?

The Jo Cox Foundation in promoting this amendment talk about crimes such as stalking, groping, indecent assault and kidnapping, it would be simple enough to track reports of these offences against women.

Instead, the amendment will result in guidance which redirects police away from the straightforward task of recording male violence against women to considering “perceptions of hostility related to gender”.

Consider these situations (extracted from the Gender Dissidents survey):

I was horrified at men approaching me on lesbian dating sites. Most of them didn’t declare this and I worked it out. I felt humiliated and a bit scared that I might have met someone in person without knowing they were biological men. It chilled me to the bone. I can now spot them and block them, but it was unpleasant and degrading for me at the time.

For more than twenty years ago now, I had the experience of finding myself married to a severely AGP (autogynaephilia) man who had deceived me about his behaviour for many years of our ‘relationship’. Those years of duplicity were in no way happy ones. I experienced the full force of his gaslighting and narcissism. I just could not understand where it was coming from. I believed he was depressed and tried to support him but he deceived me on every level with a web of glittering lies. He was a man who lied for fun, a sexual predator, a sexual exhibitionist, a man who was having sex behind my back with multiple men and women across at least three counties. He had spent thousands of pounds on his obsession with ‘passing’ while telling me his businesses were failing and thus leaving me to pay the household bills. I would not wish those years of my life on my worst enemy.

My husband moved out to live his new life as a woman. Those twelve months were a hell of lies and insults. I was told that I should be okay with him transitioning because I “had too much testosterone to be a woman, so should be happy for him to take the female role.” And there was a myriad of other examples of misogyny that peppered his arguments.My children were just starting their teens and were both affected badly by this. My daughter fell out with her Dad, until she decided that she was nonbinary and then she fell out with me. We haven’t spoken in over a year and she wrote to me recently to say that she is now a boy (age 18).  My son had a serious mental health issues with self harm and suicide attempts. When this first happened, I watched friends turn themselves inside out to be understanding and to not be seen as transphobic (though my good friends didn’t take long to decide he was a git – thank god!)

My brother wants to transition to be my sister. In the beginning we were all supportive – even my elderly parents. This period lasted two years and then as we began to learn more and question (especially me about women’s rights) my sibling grew aggressive. Our refusal as a family to be bullied into thinking and accepting his normality without question led to huge rows and now he does not speak to us. Worse, he has given very personal information about me to my ex husband (my marriage was one of coercive control) and he is using this to destroy me financially and professionally.

According to the language of the amendment, these women should be viewed as having hostility based on gender: because they are dismayed by males who identify as women invading their bodily privacy in “female-only” settings; because they are frightened by males seeking to meet them for dates when they have specified they are only interested in women; because they object to their relatives coercively controlling them in domestic situations

These women’s routes to support via the police, women’s services, teachers, healthcare workers would be cut off by accusations of (and fears of being tainted by accusations of) transphobia.

The Bill would lead to the male perpetrators in these scenarios being cast as victims (and as women) and given support – including (as Stonewall, Fawcett, Nottingham Women’s Centre and the rest argue) access to domestic abuse services for women.

The CPS have already been educating schools to tell girls that it is possibly a hate crime to object to a male adult in the girls toilets.

This amendment should be rejected because it will :

On Monday questions should be asked about this amendment in the Lords:

Lords and MPs should reject this amendment.

Tell the Lords not to back amendment 87 B: The “Dodgy Amendment Reversing Victim and Offender” (DARVO) Amendment